Belvoir Inside: How e-mobility changes our lives 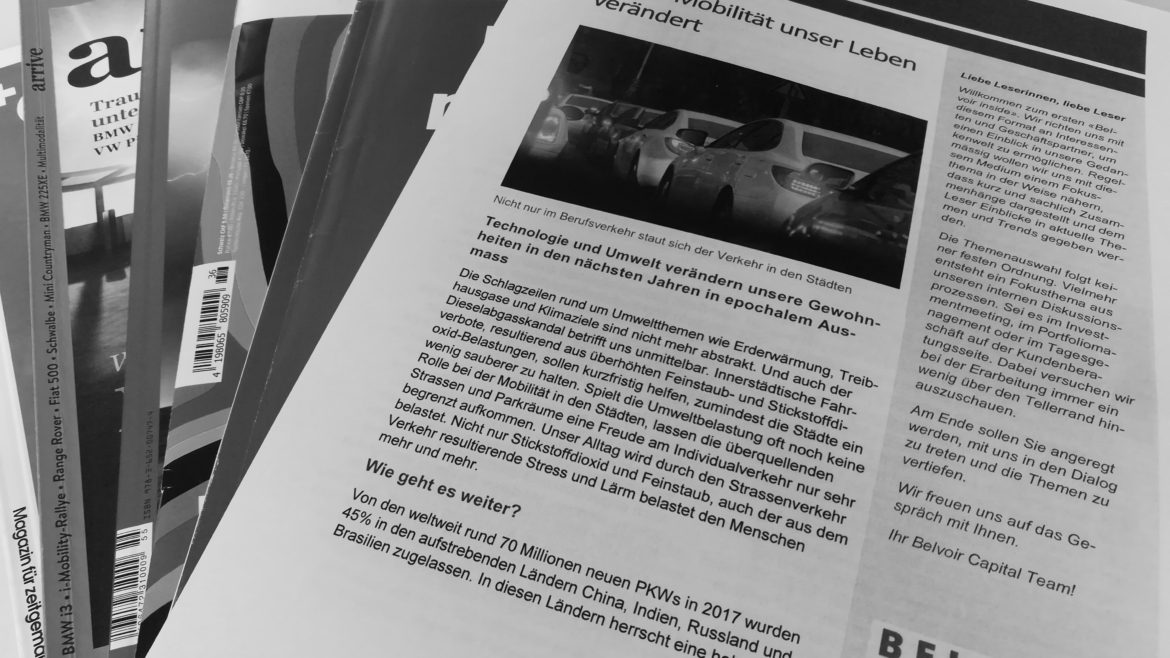 Technology and the environment will change our habits in an exponential way in the coming years.

The headlines surrounding environmental issues such as global warming, greenhouse gases and climate targets are no longer abstract. In addition, the diesel exhaust scandal also affects us directly. Driving bans in urban areas, resulting from excessive levels of particulate matter and nitrogen dioxide, are intended to help keep cities at least a little cleaner in the short term. While environmental pollution often does not yet play a role in urban mobility, the over-flowing streets and parking spaces limit the enjoyment of private transport. Our everyday life is burdened by road traffic. Not only nitrogen dioxide and fine dust, but also the stress and noise resulting from traffic is increasingly burdening people.

What is the next step?

Of the approximately 70 million new passenger cars worldwide in 2017, 45% were registered in the emerging countries of China, India, Russia and Brazil. There is a high demand for individual mobility in these countries. With the simultaneous urbanization in these regions, inner-city road traffic is exploding and often leads to chaotic conditions. Many of these metropolises suffer from permanent smog, so that the pressure for more environmentally friendly solutions now emanates from these countries. China has long been a driving force in many areas of environmental technology and renewable energies and is now a world leader in electro mobility.

In 2017, the proportion of newly registered vehicles with battery electric or hybrid drive was just under 2%. It is interesting to note that this ratio is virtually identical around the globe. In China, it was 2.7% higher than in Germany and the USA which it was slightly lower with a rating of approximately 1.6%. Against the background of the media presence of the new drive technologies, this figure appears to be negligibly low. However, it will have a different effect if growth rates and forecasts for the coming years are considered. In 2017, the proportion of newly registered vehicles with alter-native drive technologies (electric, hybrid and fuel cell) increased by 60%, by 2020 the overall share is to rise to 3-6% and by 2025, according to fore-casts, the proportion of alternative drives could be 12.5-25% for new registrations. It is estimated that by 2030 around 40% of vehicles will have alternative drive systems.

The CO2 targets from the Paris climate agreement are also urging automobile manufacturers to in-crease the proportion of electric and hybrid-powered vehicles in their model range to at least 25% in the medium term.

Two outcomes arise from the aforementioned data and forecasts above

The internal combustion engines will continue to dominate our street scene for some time to come. This means that it is still too early to say goodbye to traditional car manufacturers. However, in addition to hybrid technology, which is often integrated into the existing model series, the major German car manufacturers are working at full speed on new, purely battery-powered model series. The first models are already available. However, the major market entry with corresponding volume models will not take place until 2019. The worry is great that one could miss the “train”!

The second finding is that the market for this drive class will grow to up to 25 million units per year by 2025. Leaving this market solely to new players such as Tesla or Asian competitors would be the downfall of the German automotive industry.

The major German carmakers are working at full speed on new, purely battery-powered model series. The first models are already available. However, the major market entry with corresponding volume models will not take place until 2019. The worry is great that one could miss the “train”!

The second finding is that the market for this drive class will grow to up to 25 million units per year by 2025. Leaving this market solely to new players such as Tesla or Asian competitors would be the downfall of the German automotive industry.

The fact that this growth will actually take place is largely due to the technological development of battery aggregates. In addition to extending the range to over 250 miles with a full charge, the ability to recharge these batteries at such a fast pace is groundbreaking. The batteries can now be partially charged in just a few minutes and fully charged in less than 30 minutes at quick-charging stations.

An electric car alone does not change our habits. E-mobility means much more, namely that components communicate and network with each other.

A comprehensive network of charging stations is fundamental for e-mobility. There are currently al-most 100 fast charging stations at motorway service stations in Germany. The target is 1,000 by the end of 2019. More than 10,000 stations are required throughout Europe. Then a charging station could be reached within a radius of 30 – 60 miles. If the driver plans a longer tour, the new generation of navigation systems will calculate the route taking into account the state of charge of the battery with intermediate stops for recharging. It is also conceivable that the availability or the utilization of the charging stations is calculated in real time and an alternative route is created as efficiently as possible, depending on requirements. Speaking of new navigation. The leading German car manufacturers are working at full speed on a high-resolution road map in a joint venture. Audi, Mercedes and BMW have taken over the Here map service from Nokia in 2015. Technologically, the road network is represented in several layers in this system. One layer contains topographical information, another contains the lane-accurate road network and another layer contains information such as traffic signs. High resolution means in this context that the position of a vehicle can be determined to an accuracy of less than 30 cm. To-day’s systems indicate the location with an accuracy of 10 meters. While initially around 400 vehicles with the corresponding technology on board travel around the globe and thus map the environment, the map material will be kept up to date via networked vehicles in the future.

Then new traffic situations are read in virtually real time. A new traffic flow, temporary obstructions and the flow of traffic then flow into the navigation. All this is in preparation for autonomous driving. With this detailed information, the vehicle can be controlled precisely. Sensors, cameras and radar mounted around the vehicle record the traffic situation and fill a database from which relevant data is then made available to other vehicles. Thanks to the artificial intelligence of the systems, they learn to assess traffic situations correctly. In this way, the flow of traffic can be further optimized and individual traffic made safer.

How do you manage and collate city centers in front of excessive traffic?

The driving bans discussed here are only the tip of the iceberg. Of course, there are discussions about freeing inner cities from private transport. In many places, however, this requires better public transport services. In Hamburg, the bus fleet of the Hamburg elevated railway will be gradually converted from around 1,100 vehicles to electric buses at the end of the year. In another pilot project, passengers can enter their desired route via app. A shared taxi departs the route and accepts further passengers with similar routes. Internet-based services such as Uber or My Taxi to ensure comfortable transport. The increased car-sharing offer in Europe’s metropolises can also be ob-served. Via app, the user has the ability to selects a vehicle type, for example the convertible for the summer day trip or the more spacious station wagon for transporting the purchases made. The app then shows him the next location of the desired vehicle, usually only a few minutes’ walk away. The smartphone also gives him access to the vehicle and the vehicle can be parked elsewhere after the journey has been completed. In many cities, separate parking spaces are reserved for car sharing vehicles, so that the annoying search for a parking space is no longer necessary.

Previously, the extensive data collection in connection with autonomous driving had already been mentioned. It is already conceivable today that sensors would also scan the roadside, thus detect free parking spaces, and pass this information on to vehicles that have defined their destination in this environment.

The first “autonomous” car park is tested in Ham-burg. The owner parks his vehicle at the entrance, then he looks for his parking space on his own. This increases the capacity of the car park by 10-20%, as there is no need to get in and out of the car park.

E-mobility is not limited to the drive of the vehicle alone. Rather, it describes the networking and ex-change of data between different components. The aim of e-mobility is to increase efficiency and safety in road traffic. It is also clear that these are not visions. We are already in the middle of a phase of change, at the end of which everyday habits are being altered due to technological advances.

This also opens up interesting opportunities for investors. Not only technology stocks should benefit from this development. Overall, investments in areas such as China, automotive, battery and fuel cell technology and even traditional car manufacturers seem interesting. 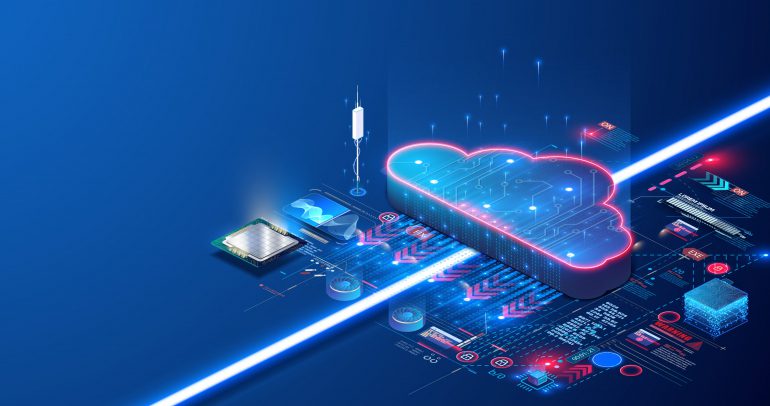